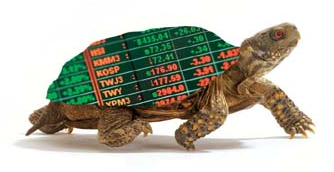 In the beginning of the 1980’s two of the most successful and more admired traders in the business were caught in a friendly argument. The discussion was regarding trading skills. One claimed you need to be born with the right skills. The other claimed that this can be taught. It was a classic nature vs. nurture argument. They were unable to agree. To settle this debate once and for all they came up with a plan. They decided to put an ad in the Wall Street Journal. They decided to hire a group of rookies. People with no solid background in trading. They decided to train them. To teach them everything. To put large amounts of money in the hands of these rookies. To see if they will be able to evolve into successful traders. Then, and only then, could the discussion be settled.

These two master traders where Richard Dennis and William Eckhardt. And their experiment would become the stuff of legends. They named their experiment the Turtles. They were going to breed traders just like turtles on the Singaporean turtle farms they had just seen. Over thirty years later, traders all over the world are still inspired by these Turtles.

The most profitable of the Turtles was Curtis Faith. He was also the youngest. At the age of 19 he went for a job interview that would forever change his life. His amazing story, from naive teenager to multimillionaire Turtle Trader is described in his excellent book, Way of the Turtle. Read it.

Curtis has been a great source of inspiration and support for me as well. His Original Turtle Rules had a significant impact on my own trader. His words of advice and encouragement has been invaluable for me in writing my book. And after all of this. He also was kind enough to write the forewords to my book.

I’m proud to have his name on my book and I owe him a debt of gratitude. Read his own words here.