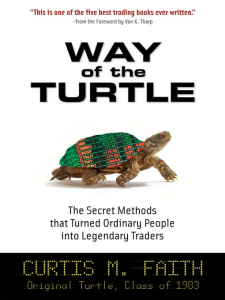 This book is an excellent training manual for anyone interested in learning how to make money as a trend follower.

I know a bit about trend-following because I was part of the famous Turtle experiment in the 1980s when Richard Dennis, the Prince of the Pits, showed the world that trading could be taught and that people with the right sort of training and perspective could make consistent returns that far exceeded normal investments. Ultimately, that ordinary people could learn to trade like the most successful hedge funds. I started as a 19-year-old kid and by the time I was 24 in 1987, I took home $8 million, which was my cut of the $31.5 million I earned for Richard Dennis as a trend follower.

I even wrote a book about it, Way of the Turtle. It became a bestseller because many traders wanted to know the secrets of our success and to hear about the story first-hand that had been kept secret because of confidentiality agreements and our loyalty to Richard Dennis, a great man and a trading legend.

Andreas Clenow has written, in Following the Trend, a trend-following trading manual I would be proud to put my own name on. I’m very picky too, so I don’t say this lightly.

Very few trading books are worthy of an endorsement of any sort. Too many are filled with tips and tricks that don’t stand the test of the markets, let alone the test of time. Too many are written by those who are trying to sell you something like a course, or their seminars. Too many want your money more than they want to create an excellent book.

That’s why I don’t often speak at conferences and you won’t see me endorsing many books. There is too much self-serving propaganda in the trading industry that makes its money by fleecing the unsuspecting newcomers; too many lies designed to rope in the neophytes with promises of easy profits and quick money that will never pan out.

Following the Trend is different.

It is solid, clearly written, covers all the basics, and it doesn’t promise you anything that you can’t actually get as a trend follower.

If you want to be a trend follower, first, read Reminiscences of a Stock Operator to learn from Jesse Livermore. Then, buy Jack Schwager’s Market Wizards books to learn about the great traders who have been trend followers, like Richard Dennis my trading mentor, Ed Seykota, Bill Dunn, John W. Henry, and Richard Donchian. They will get you excited about the possibilities but leave you wondering how; how can you too learn to be a trend follower?