Trend followers will show quite mixed performance for August. Most months are about the overall picture. This month was all about the tiny details. August was a rare month where luck made the difference between up or down.

Have you ever taken a stop on a trade only to see it turn right back up again? This is what happened on the rates sector this month. It’s much more common than one would think and certainly more common than one would like. When you take a stop just at the turning point, don’t get upset. This is part of the game. And whatever you do. Don’t overrule your strategy and get back into the trade.

The below chart shows the US 10 year note. Green area is where we were long. Red circle is where we got out. This situation happened in most of the bond futures this month. The same scenario. 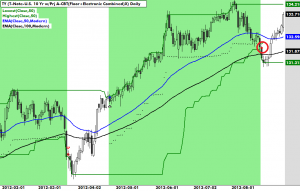 We were in a very nice trend. Riding it up since April. Profits on the books were building. Late last month bonds topped out though. They started falling back all at once. This can be worrying and dangerous, if you are not aware of your correlations. Trend following trading models are based on a simple concept. Follow the trend as long as it lasts. Now this sounds easy until the trend starts reversing. Most models, and ours as well, allow for a certain amount of give-back before exiting. Set this amount too narrowly and you risk getting stopped out too often. Set it too widely and you risk large losses when the real trend turning point comes.

In this case our stop was only slightly too narrow. We stopped out of the US10 just before the pullback ended. Had the stop been a little wider we could have stayed in the trend and made all the money back again. But you know what? It does not matter. Really. Don’t worry about it. You will never have a perfect model. Your parameters will never be right every time. In this month those with wider stops won. Another month they will lose. This is not a matter of better or worse trading rules. Simply about style and what suits your needs.

Models with wider stops tend to generate overall higher returns over the long run. Given otherwise equivalent rule set. They do however experience more severe drawdowns. You may want to experiment with combinations. Running multiple strategies with different stop width. This is a common solution in the business.

The other sectors were quite boring this month. No real moves. No real excitements. Equities did well. That is unusual for trend following strategies. Agriculturals continued to add to profits. Currencies and non-ags did less well. 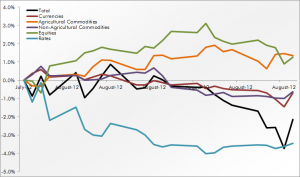 It’s quiet out there. Too quiet. Summer is over and traders are returning to their desks all over the world. It’s not likely to stay slow for long.

We are still in a situation where the bonds have been the largest differentiator between trend followers. Both on the upside and downside, this sector has been the driving force for some time. More and more professional trend followers are starting to scale back on their rates bets. Most trending models would tell you to be highly leveraged in long bond futures right now. This may still be the right thing to do. But it’s getting scary. Yields are creeping closer and closer to zero. How much further up can prices go? We’re sure to find out soon enough.