It’s been a tough year so far for trend following futures traders and quite a few CTA funds are at or near their maximum drawdown levels. With the large moves for many players in the past few months and the big discrepancy between the top and bottom performers, one has to stop to ask what’s going on here. Let’s start by looking at the Core model performance this year and break it down on sectors and then have a look at the big CTA funds for comparison.

The trend following Core strategy was struggling from the start of the year, losing bit by bit and experiencing a few larger volatility days, finally seeing a low of -12.5% on the year before things start to turn. Bear in mind that as always here, highly realistic costs are accounted for including commissions, slippage, management fees, performance fees, admin fees etc. The losses up until the lows in late April was primarily driven by the rates sector, the same sector which was the performance saving hero in 2011. As 2012 was entered, the portfolio was fully loaded on long bonds and the overall sector saw a more or less sideways move before a correction in March triggered stops across the board.

The only sector consistently performing well this year is the agricultural commodities, which made most of its money on the short side. The equities made money on the brief bull market early in the year but it has now lost all those gains again on the correction. The big factor this year and the largest differentiator between trend following traders it the long rates sector. Up until March this sector was bobbing along sideways with no real action even though the portfolio still held a large exposure to the long bonds. Then the sector had a correction phase, moving down fairly hard for a few days and we took a loss here. Almost all long bond futures hit their stops during these brief days, which in retrospect turned out to be the very lows. This is of course part of the game and the next time the stops might be just before the big move down, but in this particular case it happened at the worst possible timing.

I say that the rates are the biggest differentiator between different traders this year, since you can easily figure out how close different funds had their stops by their performance this year. The funds with wider stops did not close out their long bond futures on the lows and managed to hold on to them for the large move up that occurred just after, and these funds all show in their monthly reports that long bonds were their biggest gainer this year.

There are also many futures traders who are understandably worried about being massively leveraged in long bonds at a time when the yields are closer to zero than ever before. The upside is mathematically limited while anything can happen on the downside. Because of this many futures managers seem to have cut back on their bond exposure. If this turns out to be a good trade or not remains to be seen. So far the best strategy would have been to be massively long bonds with wide stops, but the day may come when that hits you hard. 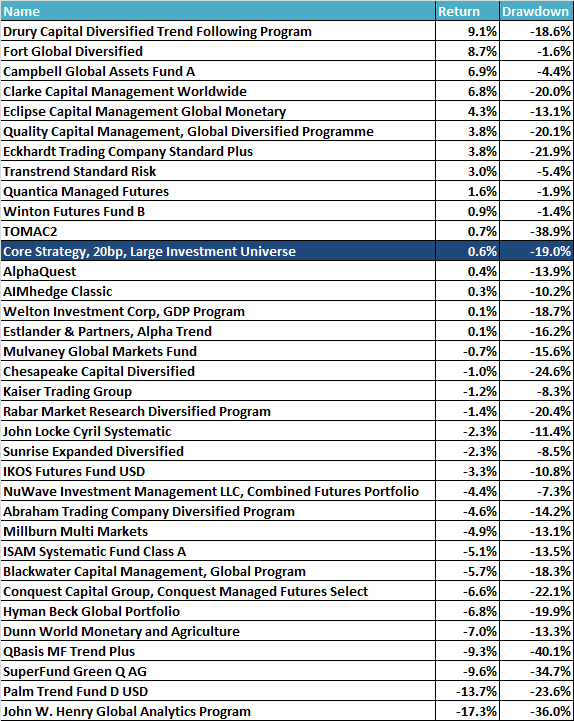 The table shows YTD returns along with current drawdown levels for the top CTA funds. The drawdown numbers for the industry are not very fun at the moment to be sure and the should remind you of the lesson not to enter into the trend following products right after a big run up. The curse of the business is that you tend to make the best return with the least amount of money, as investors come in after a strong return period only to experience a bad run before exiting. After the bad run the next strong push up comes along but then there is less money in the pot after the impatient investors left.

So with these large drawdowns and negative returns this year, should we be worried? Only if the returns deviate from what is predicted by simulations and reverse engineering of the funds. What the market has been going through recently is nothing new and the performance of trend following strategies has been like it is now and much worse at many points in history. If anything, this is a good time to enter. After every bad period like this in history so far, there has been powerful performance moves making up for the losses and considerably more.

Currently the portfolio holds a large number of positions and it has built up considerable risk in the past month. The core bet at the moment is long dollar, short commodities. There are many positions in short currency futures against the US dollar, short agricultural commodities, short energies and short metals. The secondary theme, albeit somewhat related, is a classic bear market bet of short equities and long bonds.