Trends are starting to come back into play. What we’ve seen the past few months has been a slow turnaround in the managed futures performance across most funds. The problem in the past years has been the single-mindedness of the markets. At any given time, a single overwhelming worry has been driving the markets. The reason it self has varied. Sometimes everything is driven by the fear of this one factor. At other times by the relief of the perceived lessening of the same factor.

As the global markets have been pushed between two extreme views, correlations increased. In the managed futures games, correlations is the enemy. At times correlations can generate large returns in short time periods. But more often than not, correlation is what steals your money.

Let me first show you were the trend followers stand at the moment. Then we’ll look at how the correlations have changed.

The December performance was overall on the positive side, albeit not by much. I have written before about the increasing danger that this low yield  environment poses to trend followers. Most standard position sizing algos will take on larger and larger positions in this environment. Most standard trend systems keep buying the breakouts as if it’s business as usual. Following this method means blindly accepting an asymmetric risk to the advantage of the guy on the other side of the table. Trend followers who stuck to default systems got hurt badly last year.

Historically a very large amount of trend following returns have come from interest rates. Both in playing the multi-decade bull market in bond prices and by cashing in on interest income from free capital. There is little reason to believe any of these factors will be around in the next decade. We all need to adapt and squeeze more money out of the other asset classes to make up for it.

The good news is that the opportunities to diversify are increasing lately. In single factor market regimes, diversification is but an illusion. But what we see now is an increasing decoupling between asset classes. Compare the images below. Click on images for larger view. 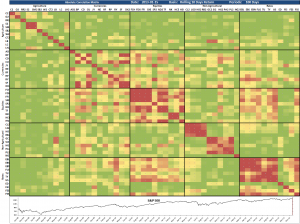 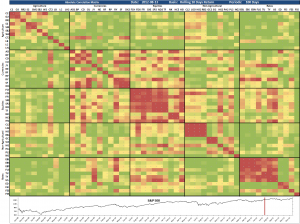 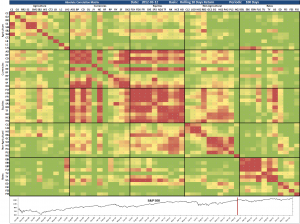 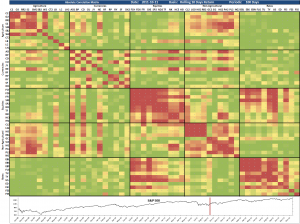 The current picture shows improvements week by week in the correlation patterns. Why is this good for managed futures? What we do is to take on a large number of trades in highly diverse sectors and asset classes. The idea is that some wins, some loses but over time we make money. When correlations are high however, there is no diversification advantage anymore. All those trades, really just amount to one huge bet. That’s when we start losing on all trades at the same time. That’s whats been happening the past two years.

Is it over? Are we back to business as usual? There are signs pointing to that. But then again. I’m not market forecaster. I don’t make predictions. In spite of popular belief, that’s not what we do in the managed futures hedge fund space. Time will tell.